Presentation of the ministry

Hope's Land is a Christian Organisation, dedicated to work in France and other countries, with the objective to make God's people learn about their identity and embrace their calling.

Cyril Cerdan is a former drug addict who practiced occultism and had suicidal urges. He decided to follow Christ in 2010, He got strongly delivered from all his addictions and demonic strongholds. After experiencing early in his walk with God, many signs and wonders, God revealed him his calling to equip the saints.

He was trained during 3 years, through the mission Helikia, forming disciples, with Patrick Fontaine.

Following that he worked on « Identity » with Don Cripe, President of GPN France, coming from the American Movement « Healing for the Nations », thanks to that he was able to grow in knowledge and putting it into practice.

He was trained concerning conflict management, preventing addictions. His professional background is in the field of Graphic design in Applied Arts. All of these experiences gave him the maturity to develop a profound teaching, new, and understandable by everyone.

Today, after a few mission trips in some foreign countries, the training of numerous assemblies and leaders, he works in Montpellier, through emerging groups, gathering people from different denominations to form the Body and the ministries.

« Two years ago, I realised how the impact of flaws in identity mangement could keep Christian people far from living full salvation and revealing themselves as sons and daughters of the Kingdom ».

Since then, he casts light on the lies that are veiling the reality of the Cross and everything that was accomplished so that no one could any longer get led astray from God's plan.

This work on strongholds of the mind is available for Christians believers and non-believers. The way that the subject is dealt is different but the objective achieved is the same, to set the captives free, it's a spiritual principle acquired for every one of us on the Cross !

2 Corinthians 10 4 4 The weapons we fight with are not the weapons of the world. On the contrary, they have divine power to demolish strongholds. 5 We demolish arguments and every pretension that sets itself up against the knowledge of God, and we take captive every thought to make it obedient to Christ.

You will find on this site books, designs, photos and testimonies in order to build your faith and support ministry.
The site functions as an e-commerce site. You make your race by putting the items in your basket by the button "ajouter au panier"
After entering your Billing and Shipping Address, you can make the payment. 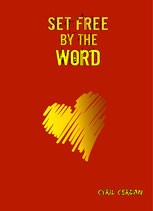